“It was like discovering a heaven on earth” responded a 59 year old lady when she was asked how she was  finding  our service. She is one of the Muheza Hospice Care patients  suffering from breast cancer

When you look at her, she looks happy and energetic but the opposite is the truth. “My husband died in 2004 leaving me behind with four children, my husband who was an Anglican Church pastor was paralyzed for four years before he was died” she said as started to narrate her story, all of her children had left her , three of them had died from  natural causes and one he just disappeared since 2002 in a mysterious way leaving behind one grandchild.

She is now living with a total of four grand children left behind by her four sons. Unfortunately  all her daughters in law have re-married and do not take care of their children from a previous marriage.

One of our palliative care specialists asked her if she had any social problems worrying her.  “As I was not aware of palliative service offered by Muheza Hospice Care, ” she narrated sadly, “ I sold both my  houses for Tshs. 700,000 ( £300 ) so as I could  pay for treatment at Ocean Road Cancer Institute.  I was forced to do that because the area where my breast was removed was rotting and stinking and this scared me a lot. I decided to sell my houses so as I could support myself .  I am still living here because the person who bought the house is very kind to me and is actually ready to give me back both  houses  if I will refund the money he paid.  I am supposed to back to ORCI on 16th of June, and thanks to the Diana centre who  will finance me I will be able to attend!”  After hearing this,  all the team were very sad because the support from  Diana fund has now finished . We are wondering  what we will we do with patients like this.  The new Director of  Muheza Hospice Care and her team are struggling to rescue the situation, attempting to raise funds from where ever possible. 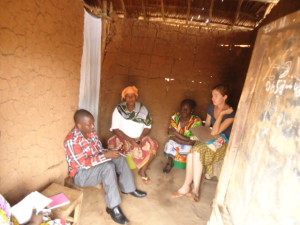 The Patient (with a head gear) and some of the palliative care members, Edgar the social worker, Herriet the PC nurse and Fran the doctor working with MHC for a year.

“Before my illness  I was be able to cultivate my small farm, but now I can’t do anything, I am living with one of my relatives  who has a small business to support our family”

She had been referred to palliative care services when she was admitted at Teule hospital . Now she at least has  support from Diana centre with services like medicines, social support, counseling, and supporting her to attend the cancer clinic at ORCI, just to mention a few.

The Diana fund is gone but its foot print will remain forever in the community of the whole of Tanga region!